The Wither Adventure Game by Ignacy Trzewiczek from CD Project Red and Fantasy Flight Games is an entertaining board game for two to four players in the dark fantasy world of The Witcher books by Andrzej Sapkowski. The players choose one of the familiar heroes Geralt, Triss Merigold, Dandelion or Yarpen Zigrin and roam the lands fulfilling quest and tasks for victory points. The game offers a fun experience for the fans of franchise but those looking for a highly competitive game or a storytelling epic may find the mechanics bit shallow.

The artwork looks good and the style is familiar to the fans of the video games. Unfortunately, the board is fairly big and needs a large table  to fit  comfortably along all the card stacks and token piles. The rule book is fairly short, but there is an additional reference guide with more detailed rules and clarifications. The game is playable after reading the just basic rules and the reference can consulted when needed. Unlike some other Fantasy Flight’s games the game is easy to set up and the rules are concise.

The players move around the board and fulfil quests to gain victory points. After someone has completed a predetermined amount of quests the game ends with the player with most victory points being the winner. The quest limit provides a good way to control the length of the game. Players complete quests by collecting clues for different locations on the map and doing investigations. Clues from locations are not random and you always know what kind of clues you are going to get. The investigations are more unpredictable, offer larger benefits and often contain further tasks or negative effects. The players are playing against each other but interaction between the players is limited mostly to trading.  Sometimes card effects also allow placing negative effects on other players and it is possible to tactically place monsters or ill fate tokens to hinder other players. 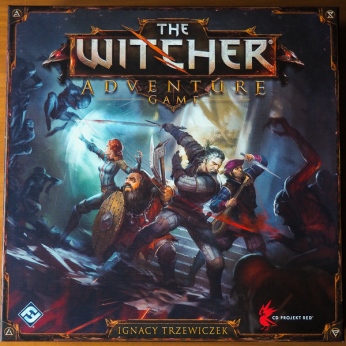 Front side of the game box 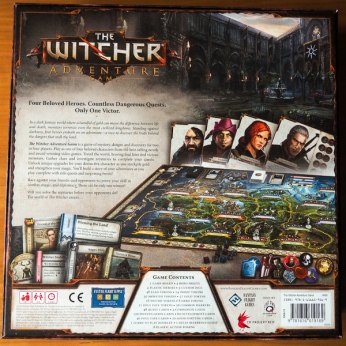 Back side of the game box

Combat works well and is fun. Especially, later in the game when heroes have more development cards use in combat.  Each opponent has attack and defence values which player has to match with a dice roll. Special dice with symbols for attack, defence, magic etc. are used and each hero has slightly different dice. For example, Geralt is better at pure combat while Triss is better with magic related rolls. Development cards manipulate the result or add results to the throw. The most powerful cards can only be used if charged beforehand with the hero specific action.

The game requires quite a lot of space.

The game is entertaining and has nice combat and hand management. However, it is best enjoyed with fellow The Witcher fans as non-fans might find the game a bit shallow. Especially, if they are looking for a competitive experience. I like the game but I would like to have some sort of opponent for the heroes. Currently questing for points can feel a bit pointless. A reason or back story pushing the heroes to complete the tasks could have added more depth to the game but  in somehow this lack of higher purpose is also fitting to the world of The Witcher. 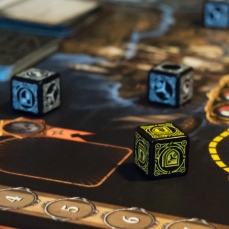 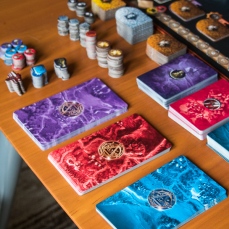 In addition to the board game a digital version is also available. If you are unsure whether you like the mechanics, the computer version is reasonably priced way to find out.